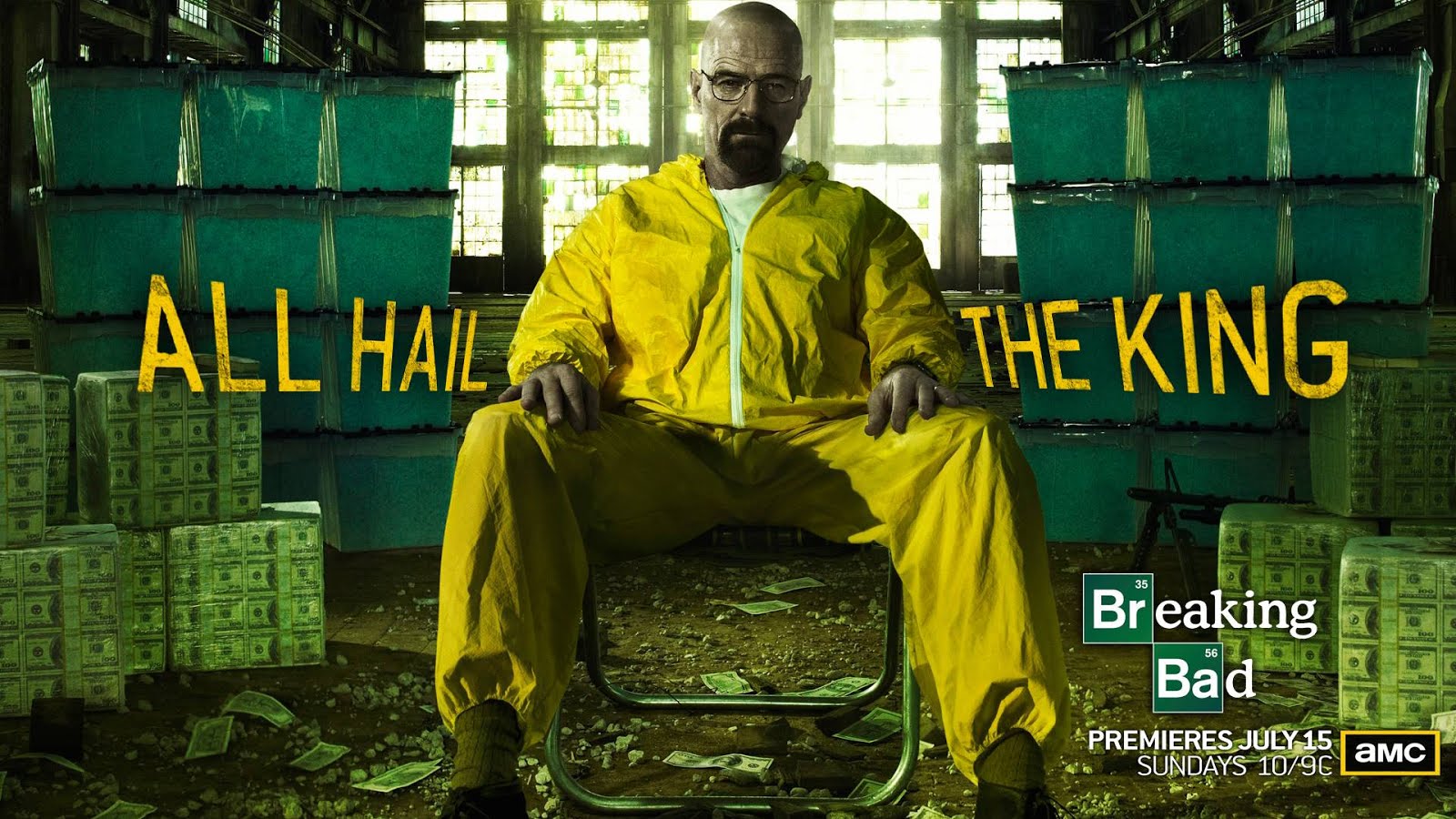 All hail the king. What image does this expression put in your head? A crown made of gold and diamond? Maybe you see a beautiful throne or a man draped in a majestic red cape? Perhaps you even see a warrior standing regally before his subjects in victory. What I doubt you see is filth, arrogance, and greed. This is exactly what Walter White, the main subject of AMC’s hit series Breaking Bad, is surrounded by in a poster advertising the show’s final season. And make no mistake: Walter is the king of the drug empire in this show, making him the poster’s central image. Set in a dim warehouse, the poster depicts an image of a dirty and exhausted “Heisenberg”—Walter’s criminal alter ego—sitting with his legs spread open over a folding chair. This posture hardly signifies royalty. Behind Walter are stacks of cash, large tubs of his signature meth product, and even a machine gun. Clearly the message here is not literally what the text, “ALL HAIL THE KING,” says to the audience. Upon a closer examination, the elements of symmetry, repetition, posture, irony, alignment, and contrast are at work in the poster to construct deeper messages about the show: Everyone should tune it to watch the epic final season, and consider the cultural commentaries along the way.

Breaking Bad is an AMC Original Series that premiered in January of 2008. The program has endured incredible success and there is a huge fanbase around the world that follows the transformation of Walter White. In trying to provide for his family after being diagnosed with terminal cancer, Walter, a well-educated chemist, turns to cooking methamphetamine. Over five seasons, Walter evolves and spirals into a violent and dramatic drug trade. With only the second half of the final season remaining, AMC released a now famous advertising poster. By this time, Breaking Bad is well regarded by the general public, and the loyal fans eagerly anticipated the conclusion of what some call the greatest TV show of all time. The poster shows Walter looking tired and sweaty in a yellow lab suit, sprawled over a folding chair. He is in a dingy warehouse with industrial windows high up on the surrounding walls. Behind him are stacked up tubs of blue meth and bundled cubes of cash. In the shadowy backdrop there is a machine gun among the loose bills and dirt on the floor. Walter’s arrogant, wide-legged stance on the chair contributes to the overall blue-collar attitude of the image. The text “ALL HAIL THE KING” comes in from the sides and into the torso of Walter.

When first skimming over the photo, many things become immediately apparent to the viewer. The first of these is Walter himself. Various factors contribute to our eye being drawn to him, including his crude open-legged posture. A slightly upward facing camera angle and his prominent alignment in the center of the page solidify him as the poster’s centerpiece. This presentation of the main character yields a feeling of danger and masculinity. His aggressive, intimidating, and no nonsense position works to establish him as a character with extreme power. Viewers immediately recognize Walter as taking charge because of his assertive position and his overwhelming stature in the context of the picture. This fits very well with the image that Breaking Bad chooses to portray about itself; the show is violent, in your face, and unrelenting. In this picture, Walter is an embodiment of the personality of his character, the show, and the feeling of the viewers that watch the show. Much like Walter is the boss of this image, the poster is saying that Breaking Bad is the boss of television, and we should treat it as such.

After passing Walter, the eye then moves over to read the text that is aligned in the middle of the page: “ALL HAIL THE KING.” The words angle themselves in toward Walter, once again establishing him as the main piece of this particular artifact. This situates Walter as the “king” of the picture and creates an intriguing irony. What is this man the king of? From the image it appears that he is the king of nothing but filth, money, and violence. It boils the entire plot of the show into its core elements and then reflects them into Walter’s image. This conveys the message that Walter is the king of his blue meth recipe. He is the king of these stacks of money. The menacing machine gun shows that he is a king that is willing to fight and kill to protect his “subjects.” Walter is the king of his filth empire, and he loves it! As viewers, we might see this design as one which is full of irony. Who would want to be the king of these things? This man looks disgusting, so nobody who controls these things must think of themselves as a king. But read deeper into the image and see that Walter owns his position of greed and is too arrogant to look back now. This is symbolic of the show’s position as the frontrunner in entertainment. The strong position makes the Breaking Bad community take pride in their show.

In addition to Walter’s character, the advertisement’s next prominent devices include symmetry and repetition. Using squares consistently throughout the picture demonstrates these traits. Every level of the artifact, beginning with the distinct periodic table themed Breaking Bad logo, contains repetition of boxes. The tubs of meth, bundles of cash sections of windows, and the folding chair frame are all squares. This design move serves to reinforce the show’s brand. Boxes give the picture a sense of unity, centering on Breaking Bad’s chemistry theme. Viewers may unexpectedly experience nostalgic feelings toward the show due to the positive memories associated with the branding. Incorporating the show’s major elements—drugs, money, etc—doubles this effect for the viewer. Once again, we see the show creating a community for itself and making outsiders wish they were a part of the epic series.

The last element at work in the poster is contrast. This can be seen specifically in the contrast between the coloring of the foreground and background. In the background are the large sets of windows that are letting in sun, causing the area to be well lit. The foreground, however, is dingy and dark and has no light source. This is symbolic of the progression of the show. At the start of the series, Walter is a much “purer” person and the show is very tame compared to the show at its current state. The transition from light to dark corresponds to the crescendo of chaos and action in the series. The show gained viewers and popularity consistently as it progressed, so Walter staring forward through the screen into an even darker area foreshadows that the show will only get messier and more intense. The viewer is supposed to become eager and anticipate the start of the new season upon this promise of excitement and suspense.

Aside from the complex design elements at work, the poster makes a cultural commentary. There is a deeper message behind the artifact. Walter’s filthy appearance and surroundings ridicule the assumptions that society holds about the image of affluent individuals. In the world today, being rich comes with a certain expectation. Rich people are expected to dress a certain way, buy certain things, and have a certain personality. Think of how financially successful people are portrayed, particularly in pop-culture. Yachts, supermodel wives, mansions, and lavish wardrobes are the norm! But now look at Walter, who has become a huge character in pop-culture, and examine the clothes, possessions, and personality he is portraying. The designer of this photograph is begging us to question why we feel that wealth must yield a certain brand of life. Even though Walter is not a shimmering example to follow, the picture invites us to question our normative conception of wealth and appearance. How a person looks is not necessarily indicative of his or her “worth” in many ways.

Long live the king. Many people, myself included, never tire of the mental stimulation provided by AMC’s original series Breaking Bad. It is the profound messages like the ones seen in the “ALL HAIL THE KING” poster that give the show strength and prominence. At the end of the day, Breaking Bad is just another form of entertainment. But does that mean that all it can be is entertaining? Of course not! Breaking Bad may seem like a harmless avenue with which to explore an idea as complex as visual rhetoric, but realize how slippery the slope really is. If we start taking things like TV advertisements for granted, where does it end? And how do we know that these seemingly harmless visual artifacts are not working toward a bigger motive? We don’t, and thinking that we do know is nothing shy of arrogant and makes us moldable by just about anyone. Through my analysis of Breaking Bad’s poster, we see that irony, symmetry, contrast, repetition, posture, and alignment can convey powerful ideas and question our perceptions about class and appearance.. One image of a man in a warehouse fueled an entire discussion about the expectations of wealth. The same image makes you eager to watch a TV show that you may have never seen. So if you never bother to look past the surface, how can you know what the rest of the message is trying to tell you?