I was first introduced to graffiti art this summer while backpacking through Europe. I was amazed at how much of it I encountered and its ability to stick in my head all day. Graffiti art became a brainteaser for me, forcing me to try and decipher what message the artist wanted me to extract from the bright colors and bold lines. So, when we were asked to find a piece to create a rhetorical analysis, I thought graffiti art would be an excellent text to examine. I came across this particular piece, and it immediately made me laugh because I always argue that I don’t need to learn facts because I will always have Google®. However, after reconsidering the piece, I realized a different message. Therefore, I thought this would make for an interesting, relevant, and engaging analysis.

I feel as if my analysis is very multidimensional. I tried to consider all aspects of the piece that could be analyzed, from the painting itself, to the location, even to the time in history in which it was created. I do like that this paper allowed me to include historical evidence such as my explanation of the digital era and introduction of Albert Einstein. You may notice that I did not cite sources in my paper. All of that information was recalled off the top of my head. Though I do worry that the lack of sources might detract from the legitimacy of my paper, I chose to continue without sources because I thought that it showed what my thought processes would have been had I seen the piece on the street (as it was intended) and demonstrated the power of conveying messages through the visual arts.

I believe this paper serves as a reminder that messages are all around us. They may be found in movies, in pictures, dance, lyrics, etc.; therefore, understanding rhetoric and being able to analyze it allows you to hear thousands of new voices from unexpected places. 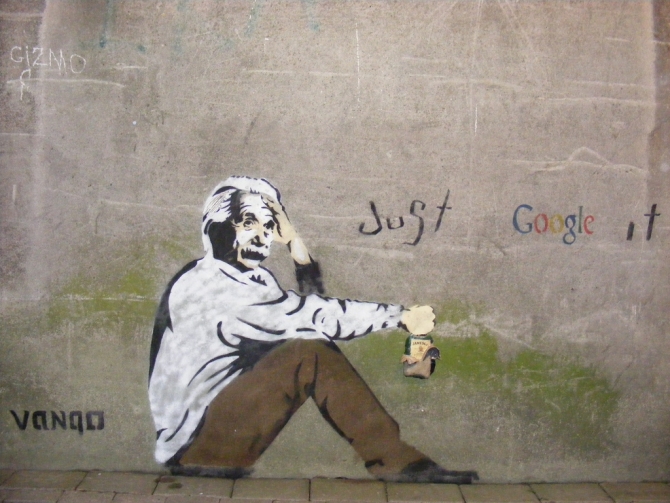 This piece of graffiti art, while it appears to simply be a cheeky form of self-expression, is actually a well-thought-out, complex comment on today’s modern society and the explosive introduction of the digital era. Created by an artist who signs his artwork under the penname Vango, the artwork showcases spray paint as its medium, having been painted with the aid of stencils. In the scene, Albert Einstein, the famous scientist and mathematician, appears to be sitting on the ground with a bottle of alcohol after having difficulties with a problem, giving up and advising to “Just Google ® it.” The word Google® is further accentuated by being presented in its signature red, blue, and yellow font. The piece uses several elements of rhetoric to argue the negative shift that society has recently endured by moving past the age of personal knowledge and into the age of electronic intelligence. Its character choice, voice, timing, and location create a message that is powerful, lasting, and provocative.

Perhaps the strongest use of rhetoric employed by the artist is his appeal to ethos. Albert Einstein has been noted as one of the greatest minds in history. His name has been used in history books, novels, movies, and even occasionally as a nickname for valedictorians and straight-A students. His many important contributions to society and revolutionary theories have created a legacy that remembers him as a problem solver and a genius. Consequently, Albert Einstein’s thoughts are regarded as important and carry with them significance. One is more apt to pay attention to the words of a genius than those of a relatively unknown graffiti artist. The creator of this piece recognizes his relative insignificance and takes advantage of Albert Einstein’s fame and reputation by making the message of the piece appear to be Albert Einstein’s thoughts, rather than simply his own. By doing so, his message is transformed from rebellion from a street-radical to considerable guidance worthy of being mulled over a few times.

Adding to the credibility of the message being “spoken” is the subject in which the “speaker” (Albert Einstein for the artist) is best known for. The phrase that is “spoken” by Einstein is in reference to information. During Einstein’s age, access to online databases was nonexistent. Knowing information off the top of one’s head, or using the information available to draw conclusions and problem solve were considered valuable skills. Even though times have changed, Albert Einstein is still associated with information due to his IQ status as a genius. Therefore, his words about information are still highly regarded as valid. His suggestion to “Just Google ® it” is ironic because he is known as a man who values an internal source of knowledge. So, for him to suggest relying on a source of knowledge that is not stored internally, but rather an external source, leads the audience to pause and analyze the message. It leaves the audience wondering why he is behaving in a manner that is so contrary to everything he represents.

This piece also relies heavily on an emotional appeal to the audience. There is suggestion of an appeal to pathos with Einstein’s perplexed and exhausted expression. A person renowned for his problem-solving skills is not likely one to abandon a problem that is mentally taxing. This piece showcases a mentally strong man as “giving up” and resorting to alcohol, which grabs the attention of the audience. In today’s society, alcohol is often viewed negatively and comes with a connotation of abuse by those who are mentally and/or emotionally weak. The audience is puzzled, leading them to try to discover the source of their hero’s grief. The piece suggests a lack of social order by defying the expectations of an intelligent, capable man. What should be a success story is condemned to uselessness and misfortune. The peculiarity of the situation is attention-grabbing and leads the audience to further investigate the situation so that they may help to restore the social order back to its normal state.

This piece is attempting, successfully, to create a satirical look at today’s society. At first glance, one wants to laugh at the ridiculous presentation of Albert Einstein.  Upon further examination, however, the audience begins to realize the intended meaning behind the artwork. The fact that the artist made Einstein look so pitiful projects the idea that he believes that the digital era comes with many shortcomings. Perhaps if Einstein were still alive he would have embraced the digital era, but his reputation as traditional is well-suited to help the artist to convey his message, which appears to be somewhat nostalgic. Thus, Einstein becomes the speaker in the scene regardless of the lack of evidence to support his thoughts on today’s society. There is an attempt to paint a comedic picture of a respectable man, which leaves the audience with a sense of discord. It begs the question “what is Google®? And why is it so bad?” The author is trying to convince the audience to share his negative viewpoint about methods of retrieving information in the present day. Whether or not his nostalgia about previous ideas of intelligence is correct or not, his piece nonetheless successfully evokes emotion that allows the audience to consider another perspective on the argument.

Somewhat similar to his appeal to pathos is the author’s appeal to logos. As previously mentioned, Albert Einstein is known for his intelligence. He has gained a reputation as a problem solver who used his intelligence for the benefit of mankind. To see him in a troubled state, with a bottle of alcohol, having given up on a problem, is highly unusual. The audience realizes conflict with the logicality of the situation. Why would a respectable man be so distraught as to resort to giving up and drinking? The artist’s choice to present Google® in its signature colors and fonts helps to further the juxtaposition in the scene. The famous red, blue, and yellow logo is highly recognizable worldwide, as millions of people view it multiple times a day. For the most part, Google® and its famous logo are associated with convenience, so to see it associated with a negative image (alcoholism) is provocative. Once again, the author begs the question “What’s wrong with Google®?”

As with most graffiti art, this piece was painted on a wall. The wall itself appears to be undecorated and somewhat dilapidated. It seems to be an ordinary wall, with moss growing on it, not too uncommon. Normally, people would walk by the wall, probably not giving it a second thought, but the artist takes advantage of the simplicity of the wall to highlight his artwork. By using bright colors and bold shapes the artist makes his artwork stand out. In a place where no other message is being conveyed, the single message created with spray painted figures becomes the only focus of its audience. Had there been much decoration or objects already on the wall, the piece and its message might have been lost by blending in. Being combined with other messages and artwork would have been too distracting and would have detracted from the piece’s attention. Conversely, the piece is the only focus, and its isolation brings its thought-provoking message to the forefront of the audience’s attention.

The location of this piece is unknown. The audience is not aware of what building this was created upon or what city it may be found in. However, it still makes use of kairos by declaring the message at an appropriate moment in history. We are presently in the digital era. Since the invention of the binary code, society has experienced the rise of technologies such as online search engines, online databases, and online services to manage their everyday lives and fulfill their needs. Google® has been a major contributor to the digital era by encouraging the invention of so many online tools for finding information, such as MapQuest® and Moviefone® for example. Therefore, this piece leads its audience to question their everyday practices and is relevant to the time period in which its audience lives. A majority of the world is connected electronically, and as time progresses, questions about the dangers and benefits of such a connected world are becoming more and more pressing. To have this artwork displayed in the middle of the development of the digital world works to the artist’s advantage and makes his message and consequent consideration by the audience even more effective.

This piece featuring Albert Einstein and Google ® is relevant, attention-grabbing, and thought-provoking. It forms a case to argue against the support of all things digital. The artist is arguing that by converting to a digital world in which computers do all of the thinking for humans, we are losing our abilities to problem solve and will forever be at the mercy of machines. Vango reveals his negative perspective of the digital world by pitting two different prototypes of intelligence against one another. By painting a picture of Albert Einstein that appears so peculiar to its audience, the artist is encouraging the audience to consider his message. The artist chose to display this message in the appropriate moment in history, the digital era, while it is still relevant and asks questions about the future. The choice of location further emphasizes the artwork, which in turn, highlights its message. Overall, the piece successfully challenges its audience to evaluate the consequences of living in a digital world.