Advertisements are cross-cultural artifacts that we take for granted in society and never usually spend time to understand. Everywhere we look and everywhere we go there are always ads. Companies spend millions of dollars each year on advertisements, hoping that consumers will purchase their products. Although we usually don’t realize this, advertisements don’t just try to persuade customers to buy products, they also construct the norms and ideals of society. As people continue to view advertisements, they begin to believe the common messages created in the ads as normal. This was Adidas’ goal with the 2008 Beijing Olympics advertisements.

As I used close, critical reading as a strategy to break down the interworking of the ad, I began to understand what the artifact represented. Not only did I use visual rhetoric analysis to understand this, I achieved my goal of becoming visually literate. I had to scrutinize the entire image part by part to be able to understand the true underlying message that the designers created. After figuring out the importance of each piece of the visual text, I began to develop the underlying message. Even though Adidas already spends millions of dollars in advertisements to promote their shoes and clothing, they also spend time and money working messages for society into the ad. Through my close critical reading, I found that Adidas was trying to convey a message of national pride into the advertisement I chose. If I didn’t spend the time analyzing each piece of this artifact, I wouldn’t have understood the underlying message. As Americans, it is our duty to be conscious of the visual texts that we see each day so we can understand the messages the media is forcing upon us. Adidas chose to create a positive message, but can the majority of businesses say the same?

Prior to the 2008 Beijing Olympics, Adidas in China released a very interesting and creative advertisement. The picture depicted a Chinese soccer player, Zheng Zhi, heading the ball, while being held up by millions of people. While the majority of the image is in black and white, the soccer player is fully clothed in a red uniform, heading a red ball. 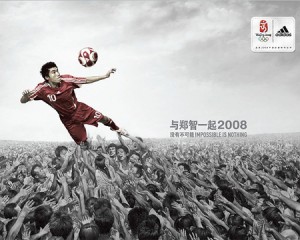 Although this advertisement may appear to be very simple, it is strategically crafted through many visual elements that all have a rhetorical purpose. Some might wonder, “Why did Adidas release this advertisement, and what is their goal?” Others may question, “What is the actual meaning of this visual text?” The designer of this advertisement rhetorically uses color, contrast, alignment, Chinese culture, and framing to make the Chinese consumers relate to the product and support their country by wearing Adidas gear during the Olympics.

An essential element of the advertisement is the usage of the color red. It symbolizes strong emotions such as danger, strength, passion, aggression, excitement, and energy. These emotions connect well to the Olympics and the adrenaline that sports bring, and red also connects to China’s national colors: red and gold. The ad’s designer specifically chose to emphasize the color red in order to conjure nationalism and bring a vibrant and energetic feel to the advertisement. If the man in the picture, Zheng Zhi, dressed in an all-white jersey, then the picture would lose most of its meanings and would no longer draw much attention from the viewer. The ad contains a red soccer ball, which brings it to life and makes the ball essential to the text. If the ball had been grey like the rest of the picture, then the text would lose some of its power, as Zheng Zhi would appear to be diving for no reason. The author’s goal of using red to show excitement in this text seems to be successful.

Besides the usage of red, another prominent and obvious element to this advertisement is the contrast between redness and the background. Making the entire background grayscale, with only the clothing and ball in red, the viewer’s eyes are instantly drawn toward the lively red color. The focal point of the piece is the Chinese 2008 Olympic captain Zheng Zhi, suited up in red. The artist who created this text chose Zheng Zhi because he is the leader of the Chinese Olympic team, and the people of China will most likely recognize him over any other player on the team. If the designer of this ad decided to choose a player who barely played in games, then the advertisement would not appeal to as many people. The designer’s decision to use the contrast of the red on top of the grayscale to create a popular focal point was an attempt to attract the most viewers possible.

In addition to contrast, the viewer should recognize the deliberate usage of alignment in the advertisement. The center alignment of Zheng Zhi helps keep the viewer focused on the middle of the page because it is the most important part of the text. If Zheng Zhi were close to the right edge of the picture, then it may cause some confusion to the reader, as the text would lose strength and seem off-balanced. The phrases are also aligned in a strategic manner. As the focal point, the soccer player and clothing are center aligned. It makes the most sense for the designer to place the words to the right of Zheng Zhi, because Chinese is read from right to left. This is important because the designer first wants the viewer to look at Zheng Zhi, and if the words were to the left of him, then there would be a contradiction in the viewer’s thought process of which to view first.

However, the question remains: what type of viewer is the advertisement trying to appeal to? Is Adidas trying to use this advertisement to gain more customers that will buy their clothing, or is Adidas working with the Chinese Olympic Committee in an attempt to get all of China to support their team? Actually, it appears that the designer is trying to achieve both with this text. S/he created a visual of the Chinese people holding up the leader of the soccer team to show their support for the Olympics. Additionally, Adidas seems to be telling the Chinese people to exhibit their support by purchasing the vivacious red jersey that Zheng Zhi is wearing. The ad conveys a message that showing support for your country during the Olympics is important, but the best way to do so is by buying Adidas merchandise to look like the team captain. The audience the designer is trying to appeal to is all of the Chinese people. It capitalizes upon the Olympics being an important kairotic cultural moment.

Not only does this advertisement use pictures to appeal to the people of China, Adidas also provides a few motivational phrases in an attempt to encourage the Chinese people to support their team through merchandise. The phrases are in Chinese and English, which is unusual, because the audience is the people of China. There is an important reason why the designer chose to include the English text. Because the Olympics is a worldwide event, and the most common second language in the world is English, the designer chose English to make the most amount of people able to understand the advertisement. Even though an English-speaking person may not be able to understand all the Chinese writing, they can still recognize the Adidas slogan “Impossible is nothing” (Adidas). This slogan is very similar to the Chinese writing, which translates to “Be together with Zheng Zhi in 2008; then nothing will be impossible” (Adidas). This statement reveals a very important part of the advertisement, as it contains a nationalistic undertone, attempting to cohere Chinese citizens. It means that if the entire country unites together to support the Chinese team, then the Chinese soccer team has a chance of winning the Olympics. Each individual Chinese citizen isn’t able to directly contribute to the success of the team, but with the extra support, the team will play better, and if the Chinese team wins, then the whole country wins.

Furthermore, the designer of this advertisement also uses framing to more successfully make a statement. This is first noticeable by the way that the sky meets the earth, keeping the entire red uniform and player above the crowd. Also, the words are strategically placed at the same level as the body to keep the eye in this general area. Additionally, every person in the crowd is pointing directly at Zheng Zhi, showing that the major focus is the athlete and the red color on his uniform. Framing is very important to all advertisements and pictures because it moves your eyes in the way that the picture is framed. The designer of the Adidas advertisement took strategic measures to frame this piece. This was done so that the viewer’s eye is directed in the way that the designer wanted it. The main reason that the designer chose the framing to revolve around the red clothing worn by Zheng Zhi is because Adidas is trying to sell the Chinese soccer jersey to the Chinese supporters.

Although the advertisement’s main purpose is to sell the Adidas products, there are also some underlying messages evoked by this visual text. As China is still communist and the government has a large amount of control over the people, these sociocultural values are present in the picture. The phrase “be with Zheng Zhi in 2008 and nothing is impossible” shows the idea that if the country wins, you win, and if the country loses, you lose. Also, the people holding up Zheng Zhi also symbolize how the Chinese support each other, just as the communist government holds each citizen up. The designer of the advertisement includes Chinese cultural ideas in order to help the people relate more to the ad. The designer found this strategy very effective to get the consumers to relate to the products, as the designer is most likely one of the people in the crowd.

As this visual text was being designed, many steps were taken in order to create the most successful advertisement that Adidas could make. The intentional use of their Chinese captain, Zheng Zhi, as the focal point initially made the people of China interested in this advertisement. The designer then used visual design principles of contrast, color, alignment, and framing as rhetorical devices to subconsciously draw the viewer in to understand the message that he is trying to convey. Finally, the creator used elements of Chinese culture to create a product and advertisement that all Chinese citizens can relate to. With the implementation of several clever techniques, the designer successfully created an advertisement that encouraged the Chinese to support their fellow citizens in the 2008 Olympic games through the purchase of Adidas products.