Before I started my argumentative essay, I read many articles about China’s education and Chinese students who studied in America. Those articles gave me inspiration of writing something about China as well. As a Chinese student, I am familiar with China’s culture and educational system. Although I did not experience Gaokao (China’s college entrance exam) in China, I knew how it works and what some disadvantages are. This would be an interesting topic which contained a lot of cultural information and knowledge. Therefore, I decided my topic was “Gaokao testing system is need of reform.” At first, I had a lot of information to present in my essay, so I had long paragraphs; especially my introduction, it was too long to read. So in my second draft; I changed the organization of introduction. I separated the parts of brief introduction of Gaokao and Gaokao history. Then, my thesis statement was very long as well, so I needed to fix it and summarize the main points which I wanted to show to my readers. Because this is a cultural topic about China’s testing system, so there were limited sources which related with my arguments online. I did a lot of research and chose the best of them as my sources. I also had issues of grammar and sentence clarities, so I edited my paper carefully in order to make it better and better. After I have done my organization, thesis statement, and several-time editing, I am finally satisfied with my essay now.

In my high school in Inner Mongolia, China, there usually was an important meeting for all seniors to take an oath before Gaokao. They needed to say “I have dreams! I have youth! When I face challenges, I will be full of confidence. I will always work harder than before. When June 6th comes, I will let my dream come true!” This is only one of the oaths which encourage students to hang on study in my school. Students are seriously hard working and they are so competitive just for an exam. This situation is very common in most Chinese high schools. Gaokao is a typical college entrance exam in China. Sharon LaFraniere said, “The gaokao is China’s grueling, ultra-competitive university entrance exam. Somewhat similar to the American SAT, except that it lasts more than twice as long, the nine-hour test is offered just once a year and is the sole determinant for admission to virtually all Chinese colleges and universities” (LaFraniere). Gaokao is truly an authoritative test which strictly tests students’ scope of knowledge. But it also distorts the real meaning of pursuing knowledge, the big stress pushes students to be overly hard working, and Gaokao is only held once a year; students who do not do well on tests must resume their studies one more year to participate in next year’s exam. Because of these reasons, the Gaokao testing system in China is in need of reform.

Gaokao has a very long history and it changed its policies for a long time. Before the New China was formed in 1949, Gaokao did not have a national policy; also, it was not held on the same date and time. At that time, different schools set up their own policies and students could go to their dream schools to take tests more than once in a year. In 1955, new policies of Gaokao were implemented. Because of China’s Cultural Revolution in the 1960s, China experienced much chaos; therefore, Gaokao policies were again destroyed. In 1977, Deng Xiaoping became the President of China; he implemented the recovery of Gaokao. After 1977, Gaokao was never ceased or abolished again.

Most high school students prepare for the Gaokao so hard in order to get a high score in the end. For many people, Gaokao not only means a college entrance exam, but also a reason for winning prizes from their parents. This phenomenon is a product of the Gaokao testing system. There is an example from New York Times. The article emphasizes the obsession of Gaokao. One student in the article said, “My father even promised me, if I get into a college like Nankai University, in Tianjin, I’ll give you a prize, an Audi,” (LaFraniere). This situation does not just happen in her family. In fact, in the middle or upper middle class, families always give some prizes to encourage their children to get good grades. One of my classmates in my Chinese high school was not very rich. He said that he wanted to have a new computer after the Gaokao; if he got good grades and could get into a good school, his parents would purchase him one. Otherwise, the computer needed to be purchased later. For his eagerness of this computer, he was extremely hard-working. It is effective to accomplish a goal when a person has a clear aim or purpose. But the purpose of exams is for chasing knowledge, not for an object which a person wants. Gaokao distorts some students’ minds because it should be an exam which makes students pursue knowledge, not pursue prizes.

Gaokao is not a simple college entrance exam; people always think it seriously connects with the students’ destiny. One of the most popular sayings of Gaokao is, “an exam can decide students’ fate of the future.” For many students’ dreams of wanting to enter top schools, they work so hard and do not want their families and friends to be disappointed in them, so they see this exam as the one of the most important things in their lives. Some students even cannot bear the stress of Gaokao. They want to “release themselves” and get out of Gaokao, so they choose to commit suicide. Most students think whether they can enter top schools or not tightly relates to their future and a good job. One of the articles from The Chronicle said that, “Passing the gaokao remains the only real route for families to get their perfect, precious bundle into a higher income bracket” (“China Begins to Reform Its Controversial College-entrance Exam”). Another article, “Three Chinese Students commit suicide during gaokao, the national test”, supports the idea about how the pressure of taking Gaokao made three students choose to die. Ironically, it is “common” that students commit suicide for Gaokao in China’s society. People have to consider the reasons why this happens almost every year in different cities. The saying of “An exam can decide students’ destiny” is controversial. Some people think it is correct because Gaokao can push students to go to a good college; others think it is too absolute to decide students’ future. Because of this exam, many beautiful and youthful lives die. Because this exam causes some students to choose suicide, it is not difficult to think about what big pressures they have when studying for Gaokao. If Gaokao policies are not going to be reformed or changed, there still will be students who want to die due to the big pressures of Gaokao.

Gaokao pressures students and makes them lack sleep and activities and it results in an unhealthy body. One of my best friends, Zhu Lei, is in University of Commerce, Harbin now. He said that when he was in high school, he studied up to mid-night or later every day and got up at six o’clock in the morning. He barely played sports because he used almost all of his time to study. As a result, sometimes he was tired in the class, and he lacked energy. Gaokao makes students become a machine of study. The books, papers, and pressures are the raw material; students need to produce the same goods cyclically. The picture (fig. 1) shows a scene in Hubei Xiaogan No.1 Middle School; seniors need to study but their bodies lack vitamins and energy. In order to get energy as well as not delaying study for Gaokao, students get IV drips in the classroom. They want to save time, so they do not have to run between the clinic and classroom. Therefore, this school decides to let students have IV drips in classroom. The picture clearly shows audiences many bottles were hung in the classroom and students still have to study. This news not only explains how serious the Xiaogan No.1 Middle School’s students treat Gaokao, but also implies students are not very healthy, because they need medical IV drips to keep their bodies working normally.

Gaokao provides a platform and opportunity for poor students to go to good universities, but it does not change their socioeconomic situation a lot. There are many poor families still existing in China’s rural areas. Usually they have more than one child in the family. Although China implemented the birth control policy in the 1970s, in rural areas, there are a number of families that can have a second child. Because of this reason, some parents do not have a lot of money so that they cannot afford for all of their children to go to school. When parents send their children to school, they spend a lot of money and hope that they can be a successful person in the future. When poor children enter into good colleges, they might have more chances to open their horizon and enrich their lives.

However, there is also a misunderstanding of Gaokao and education. Many poor parents save a lot of money and are very frugal of food and clothes for their own in order to provide enough tuition for their children. They consider that Gaokao is the only path to find a good job and to get rid of poverty. In the article of “China Tests the Future,” the author wrote “A good score on Gaokao is the path to college and the only chance for a successful future for students from poor, rural areas” (Jiang). However, most impecunious families do not realize that Gaokao cannot exactly help their families to cast off poverty. After graduating from colleges, students still face future problems such as unemployment and talented competition when seeking a job. There are many talented young people competing with each other in China. A person needs to be excellent to get a good job. Employers not only focus on the diploma, they also want to find somebody who has the practical capabilities to be qualified for this job. Gaokao actually did not solve these social problems. In New York Times-China, the article “In China, Betting it all on a Child in College” illustrates Wu Yiebing is one of thousand examples in China. He saved a lot of money just for his daughter’s education. When she faced a problem of insufficient tuition funds and unemployment, she needed to make a choice of giving up her studying experience. On surface, she achieved the goal for entering college, but there are accompanying problems which she never thought about, such as unemployment, lack of work experience and funds. On one hand, Gaokao can provide equal opportunities to every person; but on the other hand, Gaokao cannot solve future problems.

There are many problems about Gaokao nowadays; the debates about Gaokao reform are rising as well. As an important exam in China, Gaokao cannot be replaced in a short time, but there truly are disadvantages about Gaokao. Gaokao makes students tired of studying. It distorts the meaning of pursuing knowledge and makes students too over-stressed to have good health. Therefore, Gaokao truly is in need of reform, because only after reform, the Chinese testing system can be better and give students a happy and correct attitude of studying. 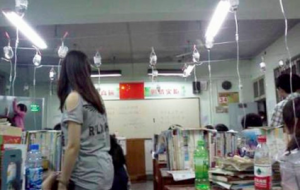 Figure.1. Image from chinaSMACK, the article “Chinese Students Get IV Drips While Studying for Gaokao Exam.”