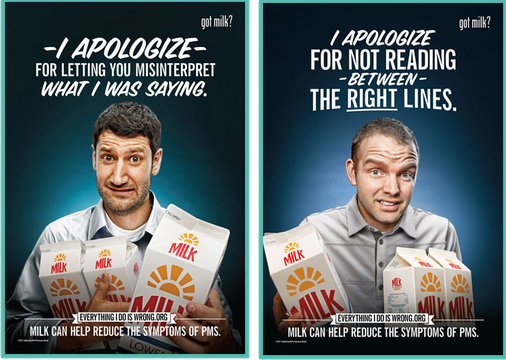 When The California Milk Processor Board sat down to discuss advertising strategies for their new campaign to make milk the talk of the town, it must have been a strange day of events. First of all, all of the women on the board must have called in sick, probably due to a severe sickness of the body and mind. To add to the madness, the men that were present probably barely made it to work alive because the severe sickness that kept the women of the board home also affected their wives, daughters, or girlfriends. As the mentally exhausted men sat around the table, apparently all they could say about this crisis is “Everything I Do is Wrong,” then as time flew by, men bonded over story after story of all the things they did wrong resulting in the launch of the sickness taking over their women. Luckily for these exhausted and concerned men, this sickness only occurred once a month; as the men brainstormed, while always having the thought of their life on the line, they uncovered a mere magic solution that would rid the world of this awful sickness. Premenstrual syndrome, the dreaded sickness that made women demonic and men tremble in fear, would finally come to an end. Milk, the life-saving, world changing cure, could conveniently be found in the nearest grocery store. As the day came to a close the men, hero’s of the world as we know it, stood from the table where the idea was conceived, took a bow, and rushed to the nearest supermarket. 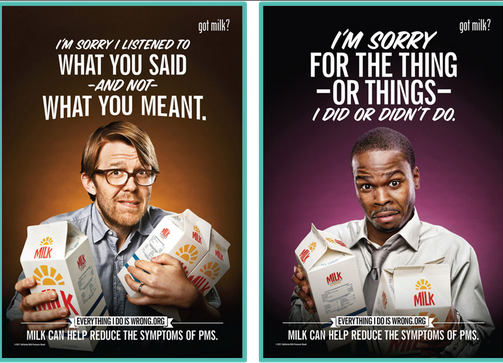 Whether or not the scene above actually did occur is impossible to know, but after looking at this print advertisement cooked up by the very popular Got Milk? crew, this is how I imagined it, women absent and men cowering in fear as they reminisced on their experiences with PMS. The campaign titled, “Everything I Do Is Wrong,” is an ad composed for men, by men. The problem with this strategy is that the intended audience is not always exactly the audience they attract. Men and women, both observers of this ad, not surprisingly had completely different reactions to this ad that was intended to be a light hearted, humorous ad that caught the eye of men and didn’t concern women. When the California Milk Processor Board considered the design of the ad, the rhetorical and design elements were directly favoring men, while not considering the reaction women would have. As a result, in combination with other credibility issues, these ads received a plethora of criticism. While there is controversy behind this campaign and it’s motives, the main question being asked by viewers of this ad should be, if women are so unhinged and flakey, why was this campaign so eager to make an ad to provoke them and the supposed crazed retaliation to follow?

Before breaking down the ad and the opposing reactions to each distinct piece, looking at the ad as a whole is essential to see holistically what would cause a reaction in the first place. The ad as a whole intended to give off the message that appealed mostly to men and maybe naïve women, but as a woman analyzing this ad all I see is the expressed message, completely looking over the intended message. What women may see when looking at this print ad is Got Milk? promoting their all around cure –exorcism included—for the demon that is possessing the woman’s body, so basically they are comparing milk to holy water or liquid gold, saving the men from being killed in their sleep or making them much happier/richer people. Besides the possible possession by Aunt Flo, the ad makes women look mindless, unable to interpret what we want and mean. What did the designers expect women to see when looking at this ad? Well that may have not been considered when mulling over the audience who they wanted to appeal to. If looking at the ad like the advertisers assumed we would, we would see milk as a mere relief from the suffering women are feeling, being both a lifesaver for the men and women. The men, obviously confused about what you’re thinking and feeling, go right away to stock up on the reliever for premenstrual syndrome to be a caring and generous man. 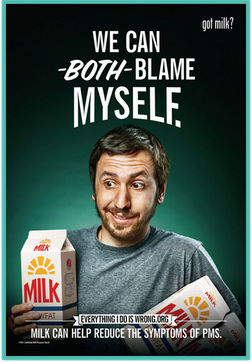 Then as he offers the milk he apologizes, even though he is still clueless of anything going on in his world because women are a mystery that men, as you can tell by their confused faces, are still trying to figure out. Or maybe the advertisers just thought this would be humorous for both men and women? I’m sure the women would easily have laughed it off too, that is if they weren’t constantly unhinged and ready to mentally break down their men at any moment as the ad implies.

As we begin to break down the ad, we can put the grand scheme under the spotlight while we analyze the text featured in the ad. Throughout the series of five different print ads with the same theme, the texts all give the same message. The meaning at the surface is the dialog of men sincerely apologizing or taking the blame but then taking that apology and warping it in a sarcastic, humorous way that reflects what men feel when they are trying to understand women. For example, one ad reads. “I’m sorry I listened to what you said and not what you meant,” while another says, “I apologize for not reading between the right lines,” but since when is this due to the diagnosis of PMS and not just the fact that men purely do not understand women? Although these texts, humorous and relatable for men, makes women seem flakey and unable to understand what they are saying and if they do understand what they are saying, they surely have no idea what they mean or actually want. Sincethis ad was aimed at men, the advertisers absentmindedly play on the age-old stereotypes that for one week, once a month, women become these irrational beings unable to think or interpret for themselves because they are completely taken over by PMS. The text presented, popping off the ad, advocates for the stereotype demeaning women, but because it’s in the name of humor it must be harmless.

As we transition down, it is noticeable that the main focus of the ad is the picture of the man. The focal point of this ad addresses the focal audience that the advertisers meant to reach. The pictures of the men trigger some of the major pathos within the ad because of the advertising strategy and the emotions they are trying to assemble. The designers behind this ad applied the plain-folk pitch when deciding the image the men would give off. By using ordinary looking men, they are using pathos such as being relatable, because it’s not just celebrity, model-like men who have to deal with women with PMS, it’s ordinary men. The picture also sparks sympathy in men for the men in the ad who are obviously being terrorized and confused by the wrath of the women in their lives. The relatable aspect makes the emotion of sympathy stronger because they’ve all, “been there, done that.” The pathos women sense when looking at the photos is basically the antithesis of what men are conscious of. When women look at the pictures of these men cowering with their cartons of milk they may also feel sympathy, but for the fact that these men look clueless. Even before looking at the picture, while skimming the text women automatically feel defensive of the accusation that underlies the “apology.” Once the defense is up and women reach the picture they might then feel guilty, wondering if their PMS really changes them enough to make their men recoil in fear as they do in the ad. Women who associate with this guilt rather than anger may come together with the men in a common emotion of relief that this picture suggests there is a simple cure for anguish from PMS for both women and men. There is only one way to see how the women really associate with the pathos at play in this ad–men, try handing a woman a carton of milk with the same expressing and stance as the men in the ad, then see if she reacts as if you’ve handed her a dozen roses, or if she explodes like the ticking time bomb you’re handing her. 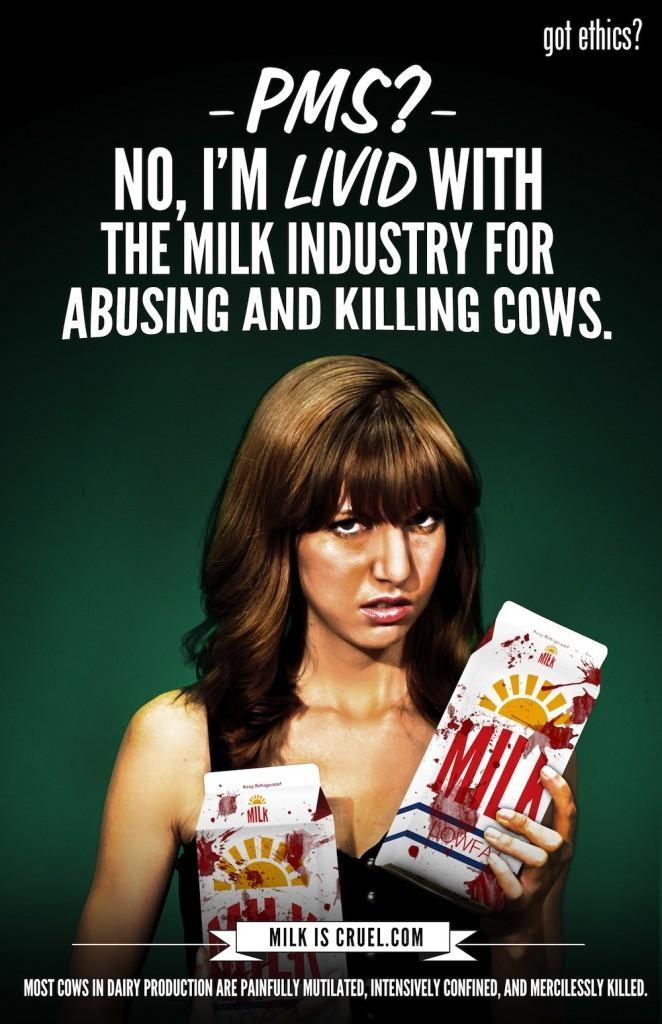 Women who did explode in reaction to these ads left their own form of humor and criticism in the unsettled ash. Some questioned the logos presented in the Got Milk? campaign. Their stated fact that, “milk can help reduce the symptoms of PMS,” was put to the test as reporters went searching for the truth from credible sources. So the Got Milk? ad isn’t credible? They are just trying to harmlessly promote milk and The California Milk Processor Board has never before been criticized for not being credible…in the subject of milk. Their ethos is questionable because a board of people who specialize in milk are stating bold claims on premenstrual syndrome, which should be announced to the public by medical professionals, not milk sponsors and ordinary men cowering with an abundance of milk cartons. Women, fed up with this ad for men by men, took a new perspective on the ad and got the underlying problems with society and the milk company in general by producing their own campaigns. The two outside parody print ads replace the “Got Milk?” with “Got Ethics?” Once again, women are questioning the ethos of the board that is willingly abusing and slaughtering cows and how people capable of doing this are at all credible telling women what is good or safe for their body. The middle print ad is outing the sexist underlying tone in the original Got Milk? ads, accusing them of using the same idea of sexism that would be used in the era when women weren’t equal, but were passive enough to quietly take the milk being offered by the authoritative man in her life. So maybe this ad was humorous to women, humorous in the fact that they got to take the accusations and sexist remarks and out them or turn them around, blaming their anger not on premenstrual syndrome, but on the questionable credibility of The California Milk Processors Board and the treatment of the animals they retrieve this precious cure from. 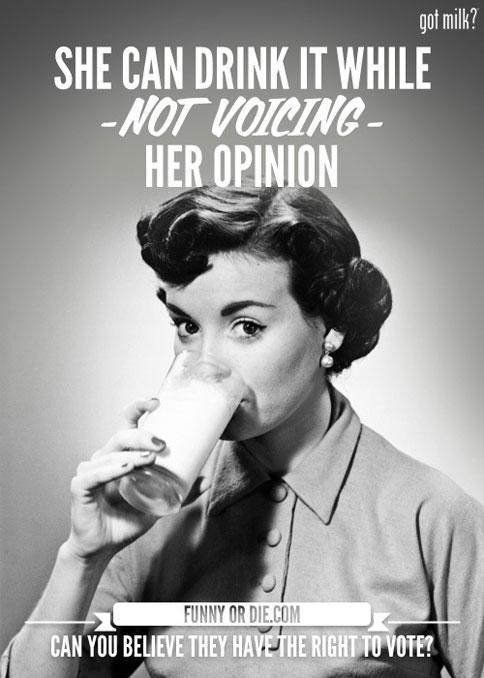 It is without a doubt that this printed advertisement caught the eye of an audience, although it was not that audience they were intending. For the California Milk Processors Board to release an ad that focuses on a syndrome that happens only in the female body, they missed a major concept, that this ad would obviously catch the eye of the keepers of the syndrome. The lack of concern with a female audience and buildup of sexist underlying meaning for men to poke fun at has actually done nothing but cause a frenzy, drawing all attention away from the ad’s purpose of promoting milk; instead it has displayed that sexism is still a problem in todays society. Looking upon the audience of the campaign now, The California Milk Processor Board will see nothing but women fighting back using their wit and canny creativity to bring equality and respect to women as men stand in the audience with the same confused look on their faces as they cling to cartons of milk, because all of the women speaking out must be experiencing high levels of PMS. So call upon the sexist gods to rain milk for serenity because there will be not reduced symptoms until, as an audience, we are considered and can relate as one. 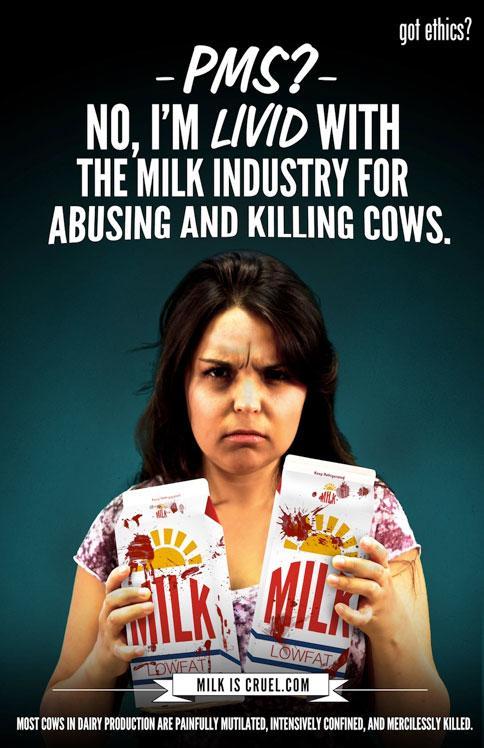