In 2004, British songwriter James Blunt released his debut album Back to Bedlam. The third single from the album was the autobiographical song “You’re Beautiful,” which described a chance encounter Blunt had when he saw his ex girlfriend Dixie Chassay, whom he was still in love with, and her new boyfriend on the subway. The music video for “You’re Beautiful,” directed by Sam Brown, shows Blunt standing on a cliff, with snow falling and buzzards circling overhead, and committing suicide following the Japanese tradition of removing one’s shoes before jumping from great heights. According to heathenmedia.co.uk, the target audience of Blunt’s music is mainly “middle aged women as they are slow ballads, which reveal love related stories.” The singer/songwriter bases his targeted audience off of the fact that women are stereotypically more romantic than men, and that middle aged women would be able to relate more to his message of love and heartbreak through personal experience than a young adult who is just beginning to experiment with relationships. Though the pathos felt through the music, color and facial expressions of Blunt, could definitely reach a broad range of ages and cultures, the simplistic cinematography, and complex symbolism is best suited for more mature viewers who would be able to make inferences based on these sophisticated rhetorical strategies, making it less effective to the younger, more ignorant viewing population. “You’re Beautiful” remains James Blunt’s most popular song to ever reach the US thus far, winning several awards including Song of the Year and the MTV award for Best Male Video and Best Cinematography. Through the use of rhetorical strategies, such as pathos and kairos, Blunt is able to express the incredible sadness and depression he felt after seeing his ex, and works to make the intended audience feel a portion of the devastation he felt following the encounter. 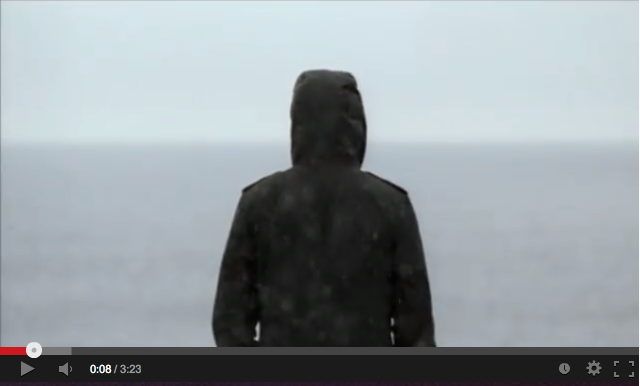 The music video most frequently utilizes the rhetorical strategy of pathos to convey the heartbreak Blunt feels in seeing his girlfriend with another man. The beginning of the video finds Blunt alone on a snowy cliff with his back turned and hood up. He sings “My life is brilliant” before turning to face the camera. His lyrics are a direct contrast to the absolute lack of color and “brilliance” seen on camera. Everything on screen is white with the exception of his hoodie, which he promptly removes. The lack of color sets a melancholy tone to the beginning of the song and persists throughout. Blunt walks toward the camera and maintains close eye contact as he continues to sing and disrobe. Because there is no color, or action happening in the background, and the close proximity to which Blunt is singing to the camera, the viewer is forced to look only at his face. His stoic facial expression and the manner in which he maintains eye contact, indicates feelings of emptiness and sorrow, which the viewer is able to empathize with as we listen to him croon about a lost love. Blunt continues to remove his layers of clothing though the snow coat he was wearing indicates that it is too cold for this to be normal behavior. By ignoring his body temperature and the discomfort that would normally be felt in such situations, Blunt portrays his lack of interest in what happens to him and shows that he is left numb by the emotional devastation his girlfriend has caused him. At this time, the camera breaks contact with Blunt for the first time and pans above him to show that the seagulls are circling like buzzards above where he is standing: a known indicator that someone or something is dead, or on the verge of death. The pathos gets a little stronger here as the viewer begins to associate the significance of the bird’s circling and the bleak setting that Blunt is forming through his lyrics and actions, or lack thereof and a sense of dread settles over the viewer.

As the camera pans back down, Blunt, now shirtless, takes a seat on the cold ground and begins to remove his shoes and the meager possessions of his pocket and lines them all up in front of him. The camera focuses on his shoes and the few things on either side of them, and Blunt sits still and fold his arms as if to say that this is all that is left of him—all that he will leave behind when he follows through with his “plan.” Presenting his few possessions is effective in making the viewer pity Blunt. His helpless state connects with the audience in a way that makes the viewer want to reassure him that life gets better. The video ends with Blunt running and jumping off the cliff into the ice water below, with the lyrics “But it’s time to face the truth. I will never be with you.” Pairing this final scene and these lyrics serves to explain Blunt’s actions as they led up to this moment. It tells the viewer that, as Blunt comes to the realization that he cannot spend his life with the one he loves, he feels pressured to end his life altogether. The entire course of the video, Blunt sings directly to the camera, as if he were telling the audience his story directly. In contrast to the direct communication, Blunt’s disembodied voice singing the final lines, the softened music, and high angle camera looking down on where Blunt has just disappeared, gives the last seconds of the video an ethereal quality. All of these devices work together to make Blunt appear a ghost, or a memory, instilling in the viewer a sense of deep sorrow as we are forced to reflect on the amount of pain he must have felt in order to feel the need to commit suicide. Throughout the entire video, the music is soft and reflective. The tempo doesn’t pick up until Blunt is running for the edge of the cliff. The timing of the music is effective in keeping the viewer’s emotions steady and somber as they watch James disrobe and prepare himself to jump. As he runs, the viewer is held in suspense not only by his actions, but from the music as well as it gradually picks up as her reaches the edge. As Blunt hits the water, the music dies down to almost silence and James sings the final lines, which give the reader a macabre feeling of life coming to an end. 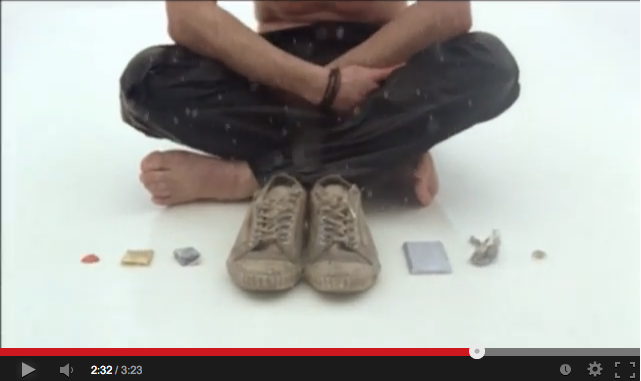 James Blunt and Sam Brown’s use of color and symbolism was incredibly effective in projecting Blunt’s pain to the audience. Even without knowing the history of Japanese suicide, which calls for the person to remove his or her shoes and possessions, the intended audience would be to pick up on the fact that Blunt is contemplating such an act from the logos of the circling birds and the location. The lack of vibrance and color in the video is a constant visual representation of the emptiness Blunt feels, and viewer is able to absorb the emotion of the song through its bleak appearance. Blunt’s continued repetition of the phrase “You’re beautiful” makes the viewer feel his longing and desperation, though it is not outwardly shown in his facial expression or body language. Throughout the music video, Blunt’s expressions, actions, melody and lyrics back up his message of heartbreak and feelings of hopelessness and betrayal. His elaborate, use of pathos, makes it easy for the viewer to empathize with Blunt. The lack of color and expression in the video, allows the viewer insight into the emptiness and despair he feels inside due to the encounter with his ex girlfriend and her new boyfriend. Though he never actually states how miserable he is, through the use of the rhetorical devices pathos and kairos, Blunt is able to portray to the audience his not so beautiful thoughts and feelings, even though his words say the exact opposite.