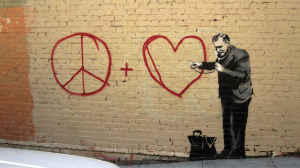 Picture this: You’re walking down the street on a beautiful San Francisco day.  You just took your mother, who is in town visiting, to the very popular China Town.  On your way back, you two are laughing about your uncle’s dumb decision to spontaneously shave his head when something catches your eye.  It’s a spray painted mural on the side of a building. Though you’re use to seeing the occasional gang tag, this painting is different. It strikes you with a sense of thoughtfulness and perspective that makes you stop and look.  It’s enticing nature lures you in, and the skillfulness of the artist convinces you to believe the message he is trying to convey. You find the image fascinating, thought provoking, and haunting. After you soak the whole image in, you lean to your mom and start discussing the meaning of the piece and how you agree with the statement that peace and love are dying in the world today.  You leave the mural feeling thoughtful yet surprised that a painting had that much of an effect on you. You walk away but the image stays in your mind the rest of the day.

Now even though that was a very hypothetical situation, it was a very real representation of visual rhetoric’s effect on the public. The scene described above happens everyday, and the artist of the mural, Banksy, takes advantage of that effect through his social commentary graffiti. Whether you think it’s a disrespectful form of vandalism or a creative outlet for self-expression, you can’t deny graffiti’s enticing nature and it’s ability to provoke emotion from its audience. Banksy is a successful graffiti artist not only because of his amazing talent, but because he uses all of the appeals of rhetoric to influence and inform his audience.

Banksy started his spray-painting career in London, England and quickly started expressing his opinions through social commentary spray paint. These messages are often anti-establishment, anti-war, and anti-capitalist. Many of the images he creates are satirical portrayals of serious political and social issues that are suppose to make the audience stop and think about their own views on the situation. He also tries to remain anonymous so the viewers don’t know anything about him personally, and they are able to focus on the art and it’s message more clearly.   His spray-painting then spread throughout the world appearing in Africa, the Middle East, and America.  The image above is located near China Town in San Francisco, California and has been protected by the city to remain there on the wall as a piece of art and to provide social commentary.

At first glance the picture above seems to be very simplistic and almost elementary.  With the crude drawing technique and the trite design of the peace sign and the heart, representing the cliché message of “Peace and Love”, the image makes the audience question the legitimacy of its creator, but when they see a very detailed doctor seeming to check the heart beat of the heart, or symbolically checking the health of love, they are taken aback.  Not only are they amazed with the detail and the technique of the painting of the doctor, but also it’s a startling and unsettling image. Banksy uses his stenciling technique to play on the ethos of his work, because people are more likely to take professional looking art more seriously than typical graffiti slang or unsophisticated scribbles on a building. It also provides contrast to the simplicity of the peace sign and the heart, making the audience focus on the doctor and the detail in which he is painted, and also what he is representing in the image, which boosts both Banksy’s ethos and pathos.

The painting technique of the doctor provides ethos, but what the doctor symbolizes provides a tremendous amount of pathos.  Doctors have a stigma about them that tends to make people uncomfortable because they are usually associated with illness and death.  When the audience sees a doctor “checking up on love” it causes them to stop and think about what the artist is trying to get across.  The concept is very abstract and peculiar, but it is very clear that Banksy is making a point saying that in the world today peace and love are dying.  The disturbing realization attaches a sense of guilt and sadness to the viewer which makes them reflect on their own life, and question what they’re doing to help cause this fatal disease of world peace and love. This causes people to become very uncomfortable because as a society we tend to focus on the positive, and hide any negativity that we may have caused because no one likes feeling guilty. However, that sense of guilt is exactly what Banksy was going for, and what makes this piece of artwork social commentary.

Though pathos and ethos are the rhetorical appeals that are the most present in this piece, from an advertisement view he also appeals to logos.  Graffiti is a very easy way to broadcast a message throughout a population because it is very obtainable, and doesn’t require people to know how to read.  It is a simple image with a powerful meaning, and by using just images it exemplifies Banksy’s knowledge of his audience because he is aware that everyone doesn’t come from the same background and knows that even though words might not be universal, anyone can look and understand a picture.  This boosts both his logos and ethos because it demonstrates that he knows the people he is trying to reach, and that makes him look more intelligent and shows that he is dedicated to getting his message out there, which makes him more credible.

Though all three appeals are already strong, he enhances all of them by the timing and placement of this painting.  Banksy painted this image in 2010, so it is still very current.  When he painted this, the War on Terrorism had been well into its ninth year, and people were starting to get anxious about when it was going to end. By painting this when he did he boosted the pathos because it was at a time when people were craving peace and love, and so this image made the audience feel even more strongly because they knew he was referencing the war.  This also boosted his ethos because it proved that he was aware of social issues and was confident enough to state his opinion.  People, especially in the United States, have a lot of respect for confident and globally aware individuals, and therefore it made him more credible and more respected. It also showed that he was intelligent enough to know what was going on and to form a strong opinion on the matter, so it boosted his logos as well.  He also placed it in a busy San Francisco neighborhood near China Town, which is a large tourist attraction, so his work was exposed to many people.

The fact that it was painted in San Francisco also boosted these appeals because San Francisco is known as a very liberal city, and has always been apart of important societal movements.  He knew that the audience that would be exposed to this painting would most likely have similar views of the world as he does, and stop and really think about this piece. This boosts both his logos and ethos because it shows awareness of his audience, which requires intelligence, and by painting it in a more liberal place, people are more likely to take it seriously and discuss it because they have the same views as Banksy does, which help boosts his ethos.

The colors that were used are also highly affective when appealing to pathos.  It is placed on a plain cream wall, and is painted in bright red, which makes the image stand out.  Also red is associated with anger and violence, which contradicts the meaning of peace and love. The doctor is painted in black giving him a very grave and serious vibe because black is usually associated with death and decay.  With these things being portrayed, it enhances the audience’s feelings of discomfort, guilt, and uneasiness.

Graffiti, whether you think of it in a positive light or in a negative light, is a very affective way of getting a statement across to a large amount of people.  Banksy exemplifies this with his social commentary artwork in which he makes the audience question not only their own beliefs, but also societies beliefs as a whole. I think he utilized all of the rhetoric appeals the best he could in a way that strongly affected his audience.  Not only did he create a beautiful piece of artwork, but also he made his audience stop and take a second to reflect on their own lives and the society in which they live. So next time you’re walking on the street and spot a new piece of graffiti take a second to stop and look. You may be surprised what you end up learning about yourself, and society as a whole.