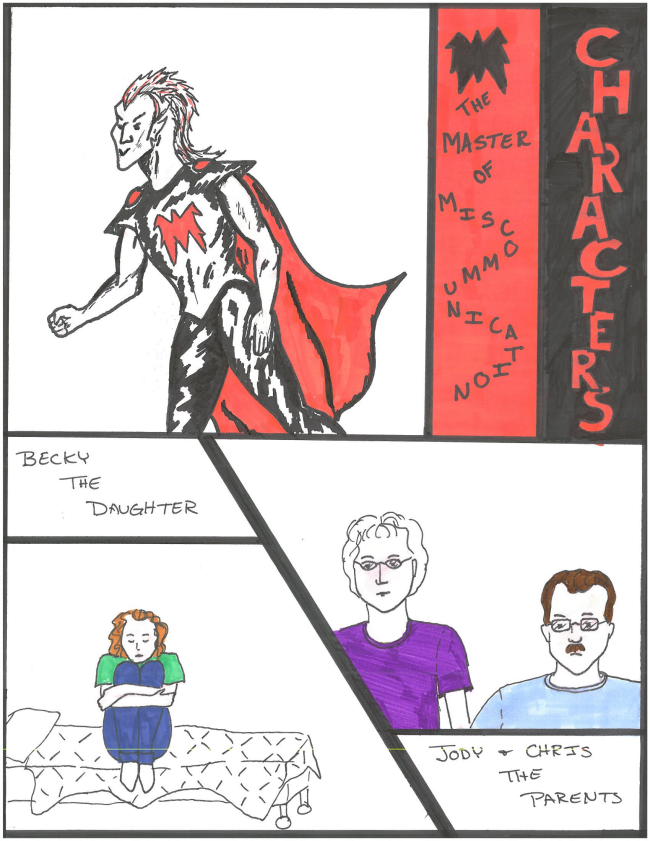 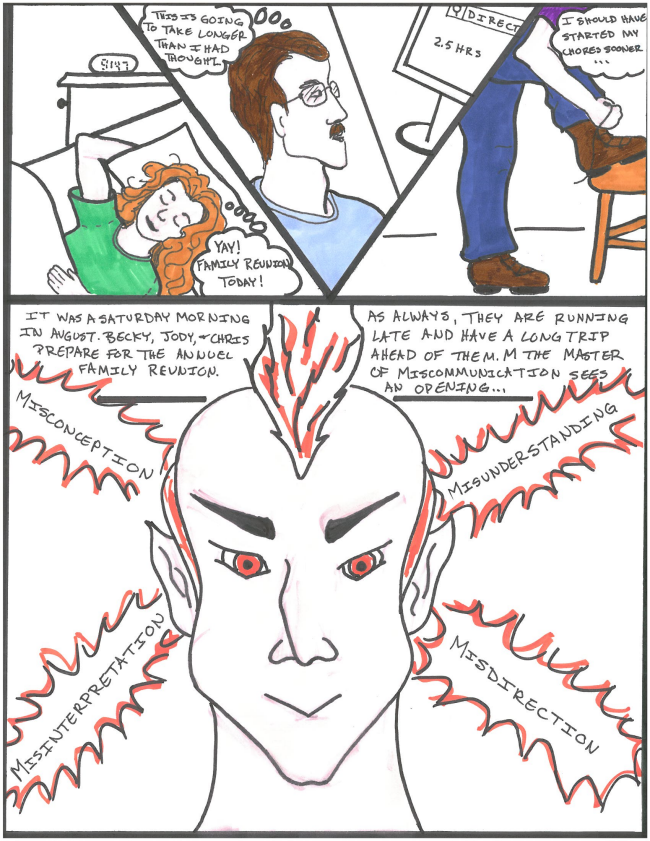 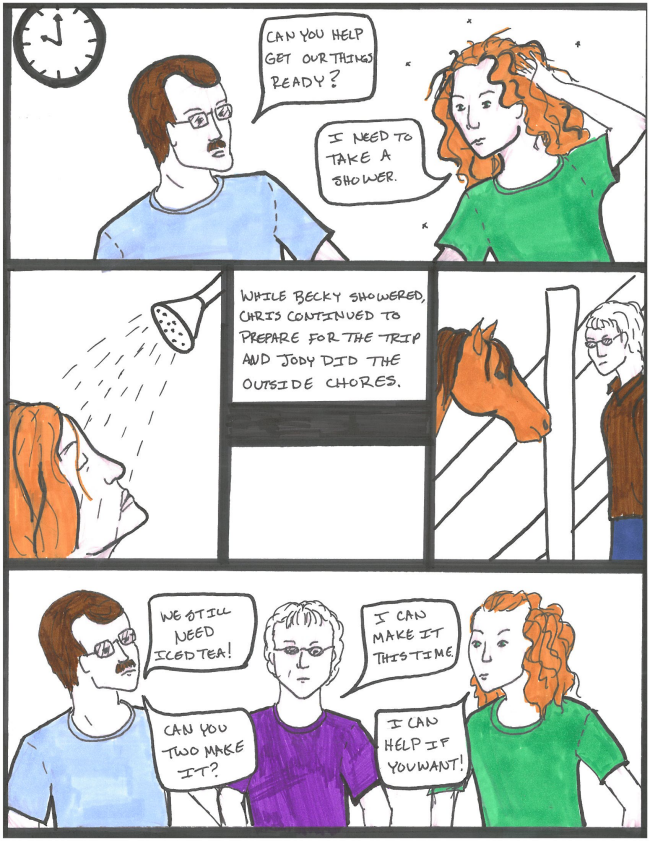 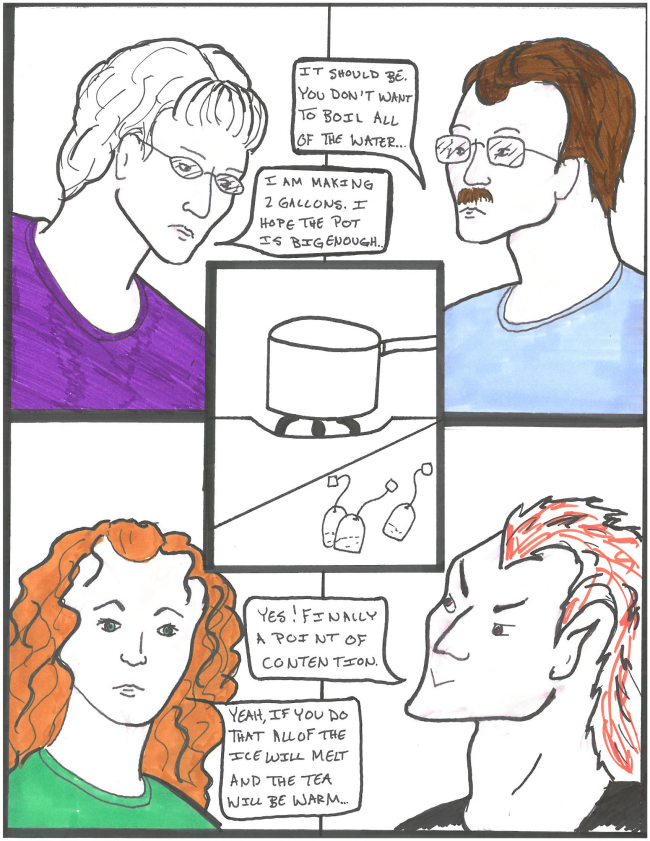 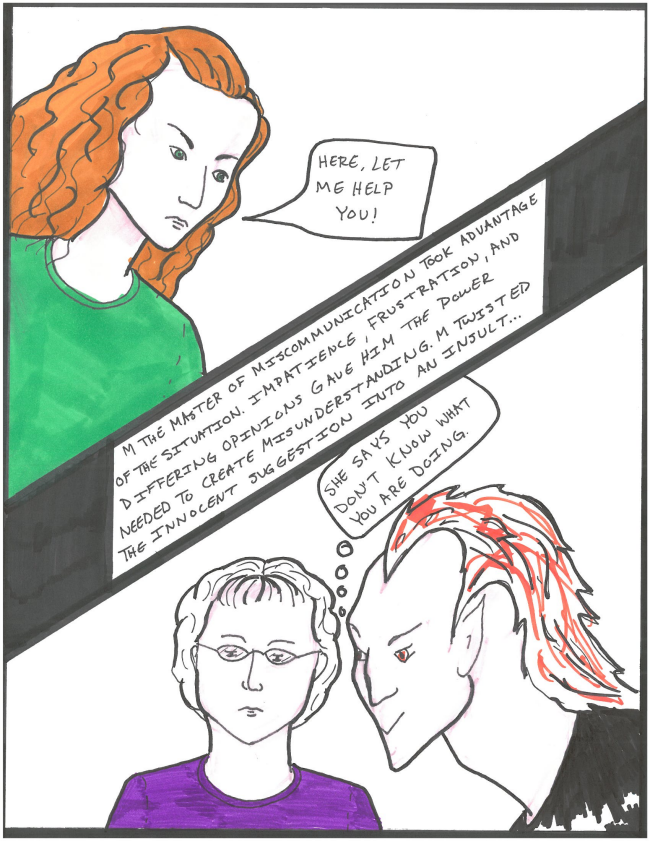 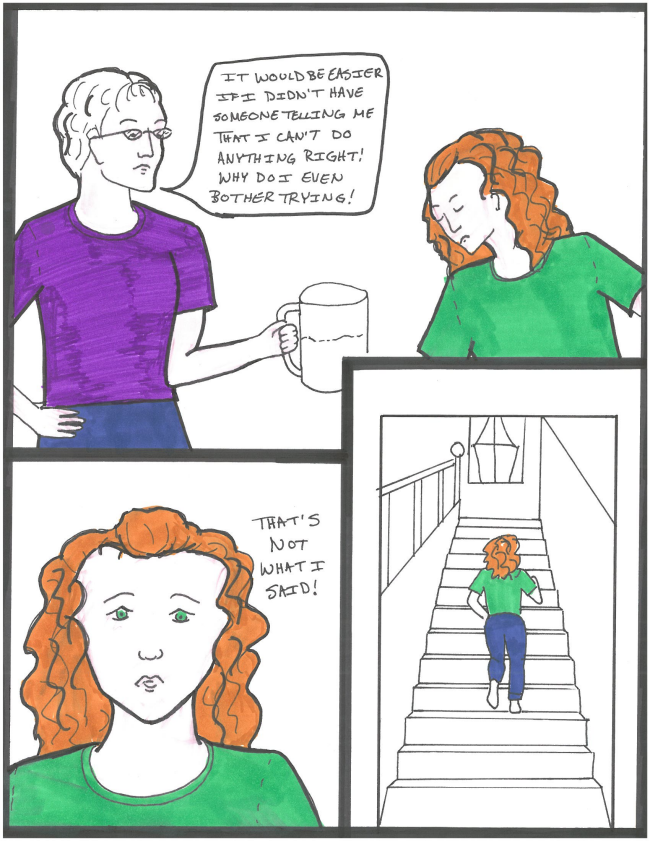 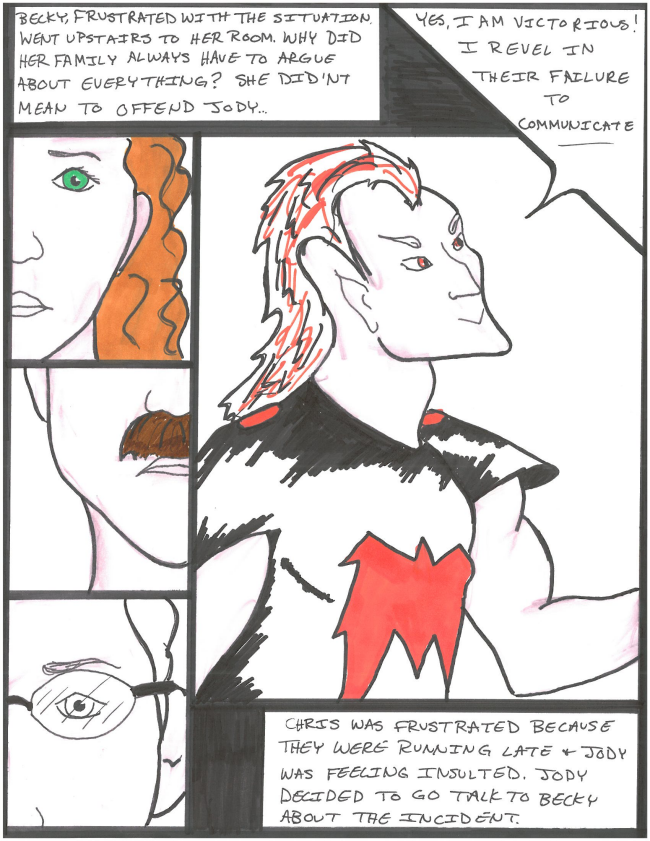 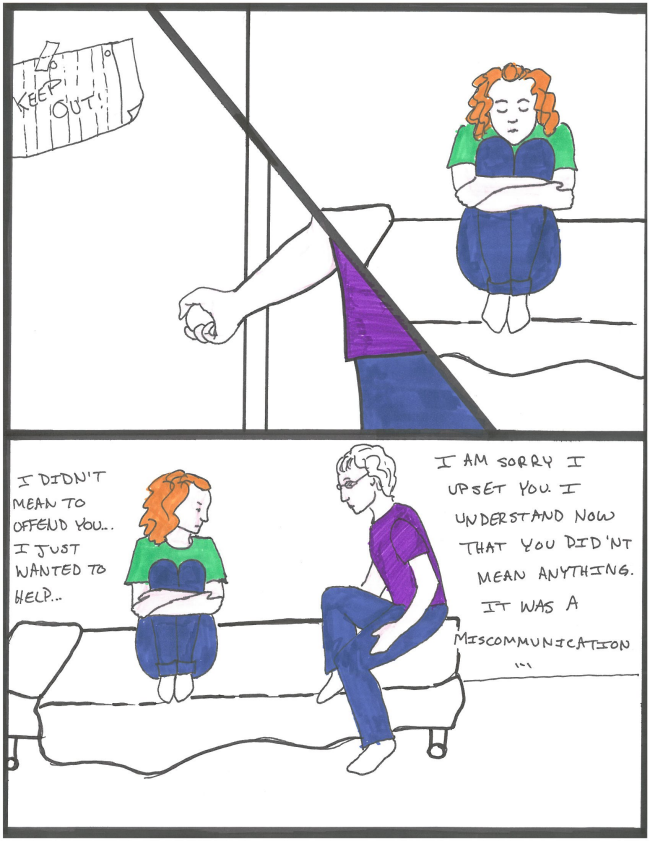 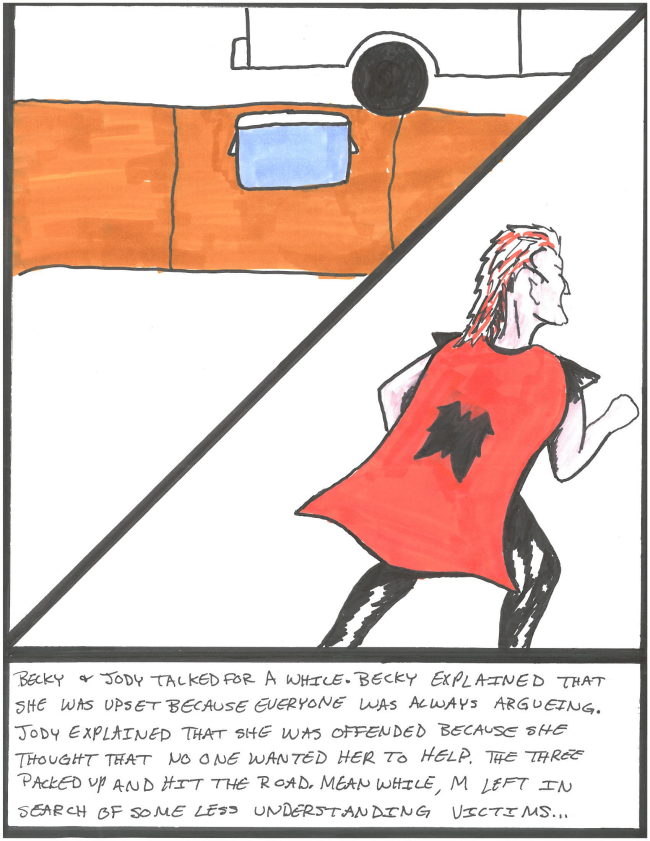 This assignment, the remediation of a previous inquiry, was challenging. Challenging in a good way. We discussed rhetoric, analyzed others’ rhetoric, and finally presented our own rhetorical appeals, but all in writing. This inquiry challenged us to present our thoughts in something other than what we were comfortable with and used to. This is most likely why I turned to another “media” that I am also usually considerably comfortable with: drawing. I am not sure if I decided on my method of remediation or the inquiry I wanted to revisit first, but I think they went well together. A lot of thought went into these decisions. I had to consider my ability, time, resources, rhetorical elements, and many other aspects in order to put together a successful remediation.

I chose to remediate my Inquiry 1 through a graphic novel for a few reasons. I chose Inquiry 1 mainly because I had exhausted my patience with Inquiry 3. It would probably have been easier to revisit it since it was so fresh in my mind, but we had just finished our research papers and I really didn’t want to look at that information again for a while. That left Inquiry 1 for revisiting. During my brainstorming I considered multiple ways of remediating through art. I had considered a comic strip, using the cartoon app “Bitstrips”, and writing/illustrating a graphic novel. An argument about iced tea seems like a weird subject for a graphic novel, but that is what I decided to do. I wanted to do my remediation through art because it I am not very good with technology and making a website seemed to unoriginal and boring. Although a website most likely would taken less time and caused less stress, I wanted to make this assignment interesting and fun for both me and my audience. I enjoy art and I was hoping my audience would find my graphic novel enjoyable, if not at least a bit humorous fro its strange storyline.

I tried to write my graphic novel with my chosen media’s “normal” audience in mind. To me, the “normal” audience for a graphic novel is slightly socially awkward teenage boys. I put emphasis on the word “normal” because this is an obvious stereotype about a group that I am not actually familiar with. This was difficult once again because of my subject. Family reunions, iced tea, and disjointed families didn’t really seem to be something most teenage boys would be reading about. I tried to model my novel after the few novels I have seen. This is why I created the villain “M” the Master of Miscommunication to personify my rhetorical failure. This appeals to the audience because all graphic novels have to have a villain, right? That was the biggest element of my original narration that I took the liberty of altering in the remediation.

I chose not to include a superhero in my story because this would have required creating another character and I wanted the lesson I learned to be seen. This is why, in the end, “M” is defeated by two of the human characters. Including a superhero to save my characters from the villain would have fallen in line with type of graphic novel I was thinking of, but not contributed well to my purpose. The important part of my original narration was that after the conflict, my mother and I talked and established where the miscommunication had come from. I felt it was important that the characters in my novel also conveyed to the audience that miscommunications happen for multiple reasons and that it is important to find where things went wrong. It is the responsibility of the people involved to resolve the problem. We cannot count on an outside force to either take the blame for or fix our failures.

The decisions I made concerning the exact format of my novel were made based on both my idea of a graphic novel and personal preference. I organized the frames in a way that I thought looked authentic and interesting. One thing I struggled with was drawing the characters. The style of drawing I was attempting was not my normal or preferred way of drawing. I wanted the characters to look both real, but also like those in comics. I normally do very realistic and detailed drawings and this project was not conducive to that type of work. Not only would it not fit the style I wanted, it would not have been practical. Reaching the level of detail I normally try to achieve would have been too extensive for this project. My own drawing abilities and style constrained what I could do with the novel. I had trouble drawing the faces in a way that was both simple and conveyed the correct feelings. Another issue was that I am not used to working with markers. I normally use charcoals and pencils that I can erase if I make a mistake. Drawing with markers, even over top of pencil, was nerve-racking for me and my hand was not always as steady as I needed. Most of the colors I used were personal preference with no real meaning. “M” was the one character who’s appearance had some meaning that contributed to the story. I accented him with red because red is often used on bad characters. I tried to make him look evil to show the viciousness of miscommunication. At first I had intended to leave him without a mouth to show that miscommunication is not always verbal. He looked even weirder without a mouth so I ended up drawing one in, just not a realistic one.

I did not try very hard to intentionally include the rhetorical appeals. For a narrative I felt that pathos, ethos, and logos would naturally show up wherever they fit. My depiction of “M” did have some purposeful pathos. His scary appearance was necessary to get the correct reaction from the audience. Presenting a villain as cute and fluffy obviously would not have had the right emotional reaction from the audience. I drew the other characters to actually look somewhat like the people they represented so there is little pathos in their appearance. Ethos and logos were also hard to incorporate into the story.

This Inquiry was definitely the most enjoyable. Getting the opportunity to use rhetoric in some way other than writing was challenging and interesting. For my first, and probably last, graphic novel this was a good experience. I had to think about how I wanted to present a simple story about a miscommunication regarding iced tea that would interest the readers. Hopefully I presented my story in an understandable way. I am concerned that, because the story is in my head, I did not provide enough detail for it to be understandable. M the Master of Miscommunication may win in the end after all…